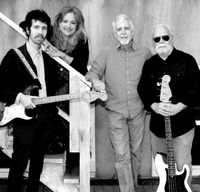 Sold Out - Beth McKee and Her Funky Time Band

A working pianist since she was 14, Beth McKee’s identity really began when she moved to Austin, Texas. From the trenches of bars and blues bands, she was recruited by harmonica legend Greg “Fingers” Taylor to join his band and embarked on a tour opening for Jimmy Buffett. Afterwards, Beth moved to New Orleans to join noted ‘90s bayou-country band Evangeline, which was discovered and signed by Buffett to his Margaritaville Records label. She released two albums with Evangeline before setting out to make her own mark.

Beth’s solo career has spanned this decade with several albums, including a 2010 tribute to Louisiana music icon Bobby Charles (I’m That Way). The legend himself was so impressed with her interpretations of his songs that she was invited to sing with him on his own record Timeless, the last before his death. “Bobby Charles mastered simplicity and universal truth in his songs; Beth was his favorite interpreter of the bared-soul truth his songs communicated,” says Jim Bateman, Charles’ longtime manager. “Everything she does taps into that universal thread that everyone understands without thinking.”

In addition to touring and coordinating the Swamp Sistas, Beth mentors songwriters, conducts songwriting clinics as musical “informances” at various Southern universities, and hosts a songwriters series in Orlando to showcase homegrown and visiting talent, as well as road-test her own material.

Beth’s band brings the best of all that together and includes her husband Juan Perez on drums, Gerry Wilhelm on bass and Grant Peyton on guitar.

Seating is limited to 50 patrons and masks are required.