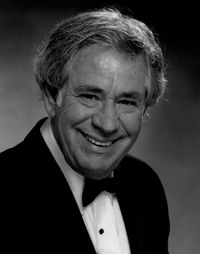 Terry Myers is presenting a high powered tribute to Dave Wolpe, one of the world’s best big band arrangers. Dave is a resident of Central Florida, and spent many years in the U. S. Army as an arranger and outstanding trombonist. He has most notably arranged for the Tommy Dorsey Orchestra and the Glenn Miller Orchestra.

"Terry Myers is undoubtedly one of the best all-around reed players in the country today. His versatility and expertise on the clarinet and saxophone are a treat to the ears." said Buddy Morrow, former leader of the Tommy Dorsey Orchestra and one of the great musicians and band leaders who was there for the early stages of the "Big Band Era".

Terry is a charming host and band leader, who puts the audience at ease and then wows them with his humor, knowledge, and musical presentation.