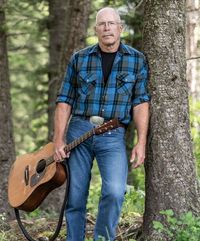 John Lowell can be described as a triple threat – he’s a clean, dynamic guitar player, a clear voiced singer, and a respected songwriter. John has been a working musician for more than 35 years in the Bozeman, Montana area. He’s well known for his work over the years with Medicine Wheel, Wheel Hoss, Deep River, Kane’s River, Loose Ties, the Growling Old Men, the John Lowell Band (a European touring group), Two Bit Franks, and the Lone Mountain Trio. John was recently awarded the 2022 “Working Cowboy Song Of The Year” by the International Western Music Association for his song "Angus Mackenzie".

Jason Thomas has been playing the fiddle and mandolin for decades. He's toured the world with Claire Lynch and Kane's River, performed on hundreds of recordings, and is an active producer and played with numerous bands in the Orlando area. His bluegrass band at Epcot draws hundreds a day for their lively and up-tempo show.

Jason and John have recorded on several albums and played countless shows together - this will be a terrific reunion!