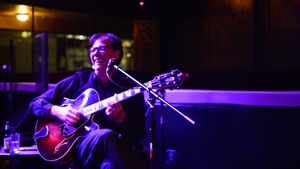 Chris Cortez is a guitarist, singer, producer, audio engineer, and videographer.  He grew up in the Orlando area and his career has taken him around the world.  As of February 2015, Chris and his wife Melody have returned to Central Florida to create this exciting new venture.

Chris' song and CD Aunt Nasty (A funny, G-rated memory of a visit from a bawdy aunt, in his childhood) became the 3rd most requested CD on Sirius/XM in 2013, and his most recent release Top Secret was in contention for a Grammy nomination.

Melody Cortez has a background in business from the human resources perspective.  She spent 18 years working in that capacity for a major manufacturing company called Rain CII.  Along the way, she discovered her inner artist and began creating an impressive body of work.  Together with Chris (also her husband), she decided to come back to the Orlando area to create this new Art Center, and to pursue life as an artist.

In Melody's own words - "I discovered my passion for painting quite by accident as I was pursuing a business degree at Loyola University.  Needing an elective to fulfill my final credits in early 2005, I signed up for a class called Art and the Environment with Professor Jacqueline Bishop.  Upon finding out the class required me to create original works of art, I began the class with a great deal of trepidation, but soon began producing unique artwork for the class.  From there, my interest blossomed.

After moving to Houston in late 2005 and encouraged by family and friends, I began a series of private lessons with Stephanie Lienhard, a prominent Houston artist.  Until my lessons with Stephanie, my medium was mainly acrylic on canvas.  Stephanie introduced me to oil pastels and the unique features of painting on wood.   I now do most of my work on wood, in either acrylic or oil pastels, although I have not given up painting on canvas!

My style can be described as modern impressionist, utilizing vibrant colors, with a great deal of emphasis on texture.  Dense brush work and the use of external elements like dried flowers, sea shells, crushed rocks and other sorts of bling are incorporated for a tactile effect.  I work in medium to large sizes, from 36" X 24" all the way down to 4" X 6".

To all aspiring artists - just go for it, enjoy it - you never know what's in you!"