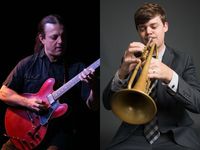 Blue Bamboo regular and renowned guitarist Bobby Koelble will present an evening with the Scott Dickinson Trio. The trio is proud to claim Bobby as a founding member, along with bassist Ben Kramer. They’ve just completed tracking their debut album, and are excited to share many of the selections with the public.

Trumpeter, composer, vocalist Scott Dickinson has won or placed in multiple performance, arrangement, and composition contests including the International Trumpet Guild, the National Trumpet Competition, Downbeat Student Music Awards, and the Doc Severinsen International Composition Contest. He’s performed with jazz greats such as Larry Coryell, Alphonse Mouzon, Richie Cole, and Michael Feinstein, and is a member of the Dr. Phillips Jazz Orchestra. Professional and collegiate groups across the nation have played Scott’s arrangements, and he’s been commissioned to create music for jazz ensembles, choir, and orchestra.

The trio focuses on meticulous arrangements that highlight the groups’ intimate instrumentation. Songbook hits and jazz standards make up the bulk of the bands’ repertoire, but they also perform original compositions. Select arrangements feature Scott’s vocals, which are oft compared to trumpeter and vocalist Chet baker.

Bobby Koelble is a guitarist and teacher whose artistry ranges from straight-ahead jazz to heavy metal. He is a graduate of Berklee College of Music, and was a member of the foundational death metal band Death. He also released four albums as the guitarist/vocalist/composer for the eclectic rock band Junkierush. Today, Koelble is a professor of Jazz guitar at the University of Central Florida in Orlando and Rollins College in Winter Park, FL. He is guitarist for the Dave LaRue Band, The Absinthe Trio, and is a member of the hit jazz group "The Jazz Professors," who have released two Top Twenty Billboard Jazz albums to date. He has performed with Sam Rivers, Dr. Lonnie Smith, Lou Donaldson, Chris Potter, Larry Coryell, Kenny Drew Jr. and the finest jazz musicians in Central Florida.