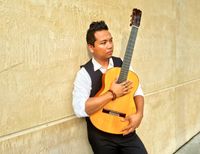 Flamenco and Jazz may be two separate art forms, yet their multi-faceted symmetries make them appear to evolve like parallels extending in the same direction, pointing to infinity like the tip of a pyramid, just never fully crossing.

This project was inspired by and points to the likeness, but just as well uniqueness constituting Flamenco and Jazz music.

Joining the trio is guest flamenco dancer, Yamile Ochoa Saaib. Yamile is of Mexican and Lebanese descent, born and raised in Guadalajara, Mexico. She began her flamenco dancing journey at the age of 8, and studied in different Flamenco Academies in Guadalajara such as Maria Antonia, Queti Clavijo, Solea and finally in Las Cabales (Dance Company).

She has participated in flamenco tablaos, as well as shows in theaters and flamenco fairs in Mexico, the United States and Spain. She has been part of the company "Las Cabales y Huellas Flamencas" directed by Hilda Prats (RIP), Triana Maciel Prats and Nino de los Reyes. She won second place in the National Meeting of Academias, organized in Aguascalientes.