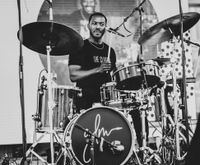 Drummer, composer, band leader Gerald Law II has built a reputation as the go-to drummer for jazz and R&B artists in Central Florida. If you’ve seen him play, you know why he’s affectionately called “the smiling drummer.” Law drives the rhythm and elevates the performance of everyone around him, including his own band The Clutch, featuring Joel Law (piano), Doug Mathews (bass), Paul Chong-You (trumpet) and Andrew Kennedy (sax).

Their latest project began in 2020 at the height of the Black Lives Matter protests, following the death of George Floyd. As a black man, a new father, and concerned citizen, Gerald was inspired to explore the issue in a unique musical project. The result is a moving set of compositions focusing on our common humanity called "Who We Are." Gerald describes the project -

"When injustices and killings are carried out against Black people, the first images we see in the media are often presented in justification for their mistreatment or death. It isn’t until the nation is in uproar or violence breaks out that a light is shined on who these people were: mothers, fathers, sisters, brothers, friends. Before the world is given a chance to feel empathy, the viral spread of images and facts, without context, obscures the reality that these are humans who did not deserve to die.

The ‘Who We Are’ project is intended to illuminate African-American culture. The music will portray who we are as people, using text and audio from interviews to amplify the sound and perspective of these voices — the sounds of these human beings."

Please join us for this intimate, revealing presentation, which will also feature selections from the Clutch’s two prior CD projects.